Skip to content
August 17, 2019.
As I drove west across Highway 30 toward Chesterton on a recent overcast day I saw quite a few monarchs, all flying from the north shoulder toward the south shoulder. I could see dozens of common milkweed plants every mile or so—more than I notice on any other highway. It was good to see so much of it but also sad to think of the number of monarchs hit by cars as they attempt to traverse the highway.  I counted two on the road, and four that blew right in front of me but that I caught sight of in my rear view mirror.
In Chesterton I wandered into the O’Gara and Wilson Antiquarian Booksellers and picked up a couple of Lepidoptera books for my collection. I took them up to the counter and the gentleman at the register began flipping through my newly acquired copy of Das Kliene Buch der Nachtfalter (The Little Book of Moths). He said he liked getting books like that just to look at the beautiful plates and I agreed that some of the best art is found in old books.
The man, whose name I learned was Doug, pointed to a silk moth and began telling me a story about how he used to collect them as a young boy. He learned how to use chloroform, then pin the moths, as collectors do. But sometime around age thirteen he had a revelation and decided to take up raising and releasing moths to, as he said, put back at least what he had taken.
I told him about the people I’ve been talking to who are raising and releasing monarchs and his face lit up with wonder. I suggested he might want to look up Journey North, and left hoping that the twelve year-old boy in him has reawakened.
A day or two after our conversation I was writing about it, remembering how his whole face had gone soft as he talked, and wanted to know a little more about this man who revered moths the same way butterfly people revere the monarch. I emailed the store and Doug agreed to let me ask him more questions. We chatted on the phone for a half hour, his recall of the moths of his youth seeming an almost tangible memory.
He remembered reading a book on moths in which the author waxed poetic about them and the fact that they were always out there, living amongst us, but we never see them. Doug was intrigued by the idea that he was “living separately and consecutively” with an unseen magical insect.
He raised polyphemus, promethea, luna, and cecropia moths of the Family Saturniidae, a gorgeous group of silk moths that look like they’ve been hand drawn and water colored by Mother Nature.
He told me about finding the cocoons (in the winter when the foliage is gone and they’re easier to spot) and keeping them inside until they pupated. He’d feed the larva, and when the moths grew old enough he’d release them, taking pleasure in releasing five dozen or more out into the natural world.
Sometimes a moth would be unable to fly and Doug would keep it long enough to mate, then he’d raise the eggs, beginning another cycle of life. Every time those eggs grew into moths ready to fly, he’d feel great satisfaction in knowing he’d increased their odds of survival by the hundreds.
One year Doug must have missed an egg in his collection and was surprised to find a moth in his room in December. He told me, “I was tragic.” That stuck with me, and I underlined the words in my notebook. It’s a thing, to be tragic when our best intentions go south with something we’ve loved.
He was disheartened at the thought of having to kill his winter moth, but there was no chance of letting it out into the winter air which would surely be worse than taking care of the process quickly. He couldn’t remember exactly how he dealt with it, though he guessed he let it have its brief life and then buried it in the spring. He sighed, and murmured they were just such magical creatures.
As we were wrapping up our conversation Doug told me his family used to call him the Johnny Appleseed of Saturniidae moths, and that he often dreams of moths. Happy dreams. I thanked him for talking with me and for caring about the moths so deeply. I reminded him about Journey North and how he could be part of the conservation of monarchs.
I like to think I’ll be seeing Doug’s name on the map of monarch waystationssomeday soon. 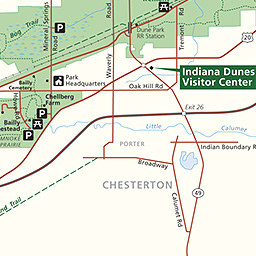 I hopped in the car and drove to the beach at the Indiana Dunes National (ne State) Park. During the hike up the back side of Devil’s Slide I found two milkweed and one egg, but no larva or butterflies.
I spent the next hour and a half photographing milkweed with the lake behind it and wondering where all the butterflies were. Most of the milkweed had infestations of aphids and their eggs. I finally found one plant with caterpillars but they were tussock moth cats.
The only monarch I saw was as I drove out of the park. It flitted by and into a little shoulder garden so I made a u-turn to take a picture. There was no good place to stop and it was already gone, but I did get a great video of a woman roller skating, arms conducting music only she could here.
Her joyful sway reminded me of a monarch riding the breeze. I watched, the same smile on my face as when I watch a butterfly, as she glided and swiveled down the walk into the sunset.