The Monarch Ultra is heading to Fort Wayne Thursday, just as the monarch butterflies will be passing through on their way south. Local runners Lizette Pierce and Rhonda Breischaft will carry the butterfly baton for a 31-mile leg on trails and streets through Fort Wayne  Thursday, September 26th.
I first met Lizette at Concordia Lutheran High School, where she introduced me to fellow teacher, Paula Booth. We were in a wooded area just off the parking lot, in the outdoor area called Our Creator’s Classroom (OCC). Walking trails wind through tall tulip poplars and wildflowers, bringing visitors past an amphitheater and greenhouse.
Lizette strode up smiling broadly, and began chatting with me as if we were old friends. A butterfly wafted by and Lizette commented that she admires them because they practice selfless pollination, helping plants grow just by visiting them. We were going to be good friends, indeed.
She and Paula were clearing some ground make room for the addition of a new butterfly sanctuary. Both are Spanish teachers at Concordia, and Paula thought adding a monarch butterfly garden would be great for their students to learn more about Mexican cultures and traditions, including the Day of the Dead, during which butterflies have great significance.
Paula Booth is a serious force of nature. She is not only a Spanish teacher creating  a new 2,000 square foot native plant garden in the OCC, but at the time we met she was preparing to host exchange students, followed by Monarch Ultra guests, while also planning the welcome reception at Cinema Center the night they arrive in town. Oh yes, and orchestrating the showing of the film Ay, Mariposa, with a talk afterward by its creator, Krista Schlyer.
When I went back to see how the new garden was going she was instructing students on using an auger to make holes in the ground for milkweed plugs while her exchange students chatted about their flights home the next day. I commented how much progress had been made and she immediately gave the credit to Sean Nolan, owner of Sanctuary Native Landscapes. He’d been out there for several days helping design and plant the hundreds of plant plugs that will welcome thousands of pollinators year after year.
Paula smiled proud mama style as she watched her students pluck out marker flags and replace them with plants. Though she must be at least a little tired from all the goings on of late, she breathlessly chatted about plans for this Thursday, when the Ultra team arrives. She’s determined to fill the 126-seat theater at Cinema Center for the premier of Ay, Mariposa, and if anyone can get it done, it will be Paula.
The garden is being funded in part by a local grant Paula and her students won, as well as a portion of the proceeds from tickets sales on September 26th. Buy tickets here. 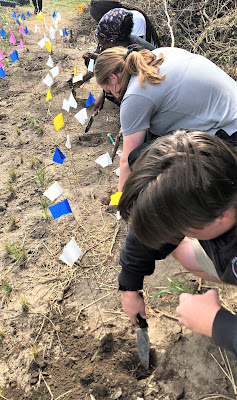 When Lizette and Rhonda met me for coffee a couple weeks later they’d both come from morning workouts in preparation for the Monarch Ultra. Their faces glowed and their excitement about the race was contagious. I was so focused on the conversation that it took me a few minutes to remember to turn on the recorder. Not to worry, though. Our conversation meandered, like a butterfly in flight, back around to Lizette’s origin story.
Lizette is a first generation college graduate, and the first of her family to move away from Arizona. She’s lived here for eleven years but will be moving back to Arizona at the end of this month.
As she talked about the move, her excitement mixed with nostalgia. “I see this race as a kind of farewell tour through the City. It’s a place that’s given me so much.”
Her grandfather raised his family in a border town in Mexico, where her father grew up before moving his family to Arizona in the 1970s. Lizette likens her family’s journey to that of the monarch.
“It’s a natural thing for us. Migration is what my family has done for generations and generations.”
She’s looking forward to the run and sees the race as a good opportunity to highlight the trail system and Fort Wayne’s natural beauty, something she believe this city was built upon.
“I’m just really excited to run. What this city has done for my family…” She paused to wipe a tear. “Seeing where the race is going, I thought that we’re going to run so many places I’ve been.”
I asked her if she planned to continue running races after this experience and she said she wants to slow herself down to spend time with people she loves,  and maybe hike with her mom.
“Whatever I can do to enjoy time in nature with people I love.”
Rhonda Breischaft serves on the board of Fort Wayne Trails, a non-profit developing and protecting a remarkable trail system in Allen County. Her passion for trails stems from her love of running in nature, among tall grasses and wildflowers.
“The trails in Fort Wayne are beautiful. They’re where I can go safely that’s pretty, and get back to nature.”
She shared an experience about a half marathon she ran more than a decade ago in Muncie, Indiana. She was just getting back into running and her competitive spirit was in high gear. But on that beautiful September afternoon out on the trails, three monarch butterflies flitted around her and kept her company for the last three miles of the race. They seemed to be having a good time, and Rhonda realized that she wanted her experience to be like that.
“It was like they were pacing me and flying me in. I’ll never forget that, it was so special.”
Rhonda said running is a time to get in her head, listen to podcasts or music, or be with friends in her running community. And the end of every race now, she thinks of her three butterflies, living in the moment. It fills her with joy, chasing them, on the trails.
Lizette and Rhonda were hoping to revise their race leg a bit to include a run past Concordia to see their students, and catch the River Greenway Trail along the St. Joe River. As I watched them brainstorming the route I couldn’t help but notice how in the moment they were. Like butterflies, enjoying life in a little sunny spot on a fall morning.
See the Monarch Ultra’s Facebook video of Rhonda and Lizette Here.

Fundraising Event September 26
Shown Exclusively September 27- September 29
Ay Mariposa tells a story of three characters in the Lower Rio Grande Valley of Texas whose lives are upended by plans to build a US-Mexico border wall. As the director of the National Butterfly Center, Marianna Trevino Wright has become a leader of wall resistance in the Valley, a position that has resulted in violent threats from pro-wall factions and an emotional odyssey as she tries to navigate the ever-shifting sands of border policy. Zulema Hernandez, a life-long migrant worker, immigrant and great grandmother, has been a dedicated advocate for all migrants, both wild and human-kind. Meanwhile the butterfly, la mariposa, fights its own daily battle for survival in a landscape where more than 95 percent of its habitat is long gone and much of what remains lies directly in the path of the wall.
Ay Mariposa documents each characters’ fierce commitment to home, justice, wild beauty and the future of the US-Mexico borderlands.
Fundraising Event September 26 at 7PM – General Admission: $15
NR | 57 Mins | Documentary

Get your tickets here!